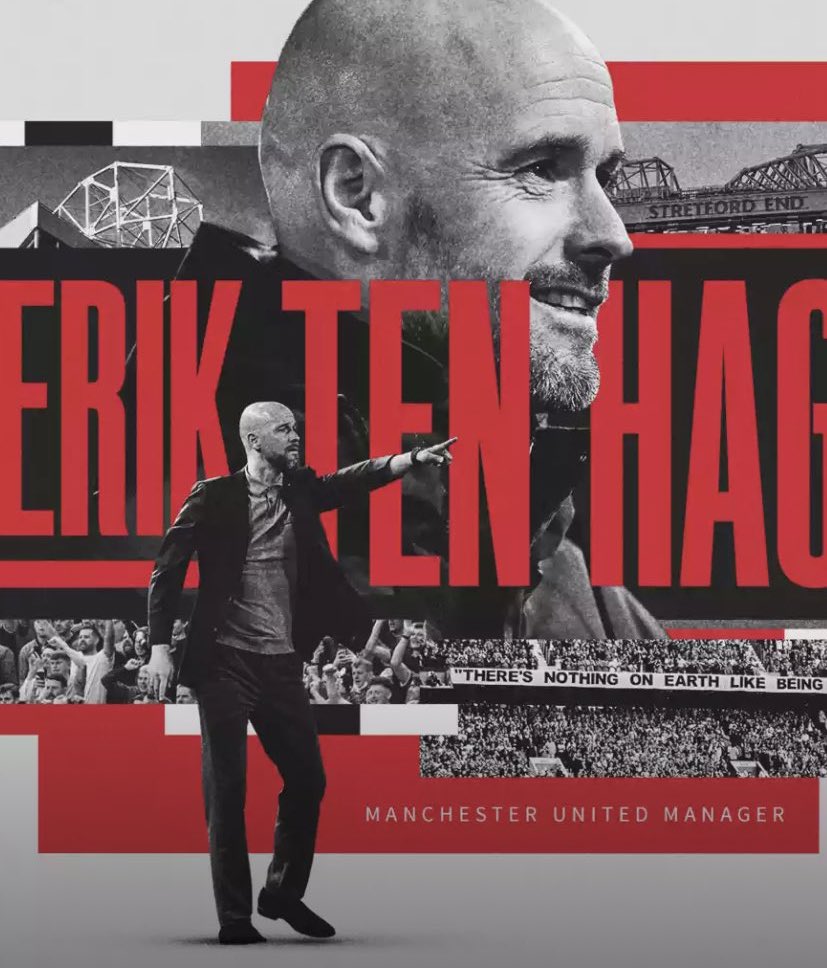 Manchester United have confirmed the appointment of Ajax boss Erik Ten Hag as their new manager.

The 52-year-old Dutchman has signed a three-year deal with the option of a 12-month extension. He succeeds Ralf Rangnick, who would vacate the position at the end of the season.

“It is a great honour to be appointed manager of Manchester United and I am hugely excited by the challenge ahead. I know the history of this great club and the passion of the fans, and I am absolutely determined to develop a team capable of delivering the success they deserve.”- Ten Hag told the Red Devils.

“In our conversations with Erik leading up to this appointment, we were deeply impressed with his long-term vision for returning Manchester United to the level we want to be competing at, and his drive and determination to achieve that.”

Who is Erik Ten Hag

The Dutchman was a 5”11 center half who did not enjoy success in his playing career.

Ten years after retirement, Ten Hag’s managerial role started when he took over Go-ahead Eagles in the Dutch second tier.

He impressively illustrated his tactical nous, which earned the dutch side promotion to the Eredivisie after 17 years of absence.

German outfit Bayern Munchen were quick to notice his credentials and secured his signature. He took charge of their second team, which was currently struggling in the fourth tier of the German league.

Ten Hag returned to the Netherlands, where he became in charge of FC Utrecht and enjoyed a successful spell at the Stadion Gangelwaard, securing a fifth-place finish in his first season.

The Dutchman heroically secured a Europa League spot for the ‘Cupfighters’ in the 16/17 season after cementing a fourth-place finish.

After the departure of Marcel Keizer at Ajax, he took charge of the club and famously took them on the run to the Champions League semi-final.

He defeated Juventus and Real Madrid at their ground but eventually fell to a defeat against Tottenham, which ended his final hopes.

Ten Haag’s discipline has been top-notch as he tolerates no unsettlement in his dressing room. That is a significant concern and one of his tasks as a manager of United.

He led Ajax to five trophies — the Dutch Championship, the Dutch Cup twice each, and the Dutch Super Cup once.

In the previous seasons, he varied from using three at the back to a 4-4-2 diamond depending on his analysis.

Ten Haag is an attacking-minded coach and has been consistent with 4-3-3 while scoring goals by breaking down their opponents.

Following their most recent loss to Liverpool, which had their top-four hopes lingering, the current interim manager, Rangnick, suggested his counterparts were years ahead of him, and the whole team needed a rebuild.

According to Sky Sports, United have approved a budget of 200m for Ten Haag’s summer spending.

We’ve seen Coaches reunite with their former teammates or players at their new clubs. The summer overhaul makes us look at who Ten Haag might be bringing with him from Amsterdam.

Reports have it that Bayern has secured the signatures of two talented youngsters in Noussair Mazraoui and Ryan Gravenberch. However, the current Ajax side still boasts plenty of talents who would fit into the United side.

United are struggling to produce a right-winger, with their recent signing, Jadon Sancho, often deployed as a left-winger.

Estimated around £ 50m, Anthony would be an essential addition to United and Ten Hag’s style of fluid attackers.

He has racked up 12 goals and eight assists in 39 games this season in all competitions.

Another name rumoured to follow his current manager to Old Trafford is the 20-year-old defender Jurrien Timber.

Timber is versatile and can slot in at right-back and holding midfield, another position United is currently struggling to fill. He is an upgrade to the error-prone Harry Maguire and the erratic Scott Mctominay.

With the money and calibre of United players, you would hope this is a challenge Erik Ten Hag cherishes as he looks to return United to winning ways.