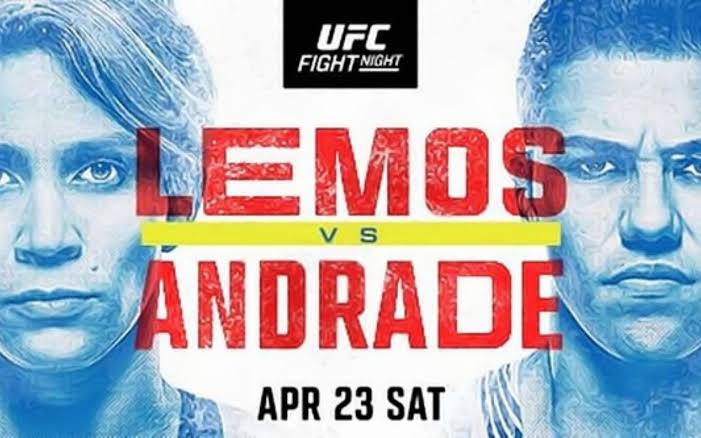 UFC Fight Night will return this weekend, headlined by an explosive matchup between Amanda Lemos and Jessica Andrade. The bout takes place at the UFC Apex · Enterprise, Nevada, United States and you can watch this live via ESPN+ and various other UFC streams.

Amanda debuted in 2017 against Leslie Smith at UFC Fight Night. She lost via TKO in the second round after the visible physical difference played a significant role.

The Brazilian then faced drug charges from USADA and left the sport for two years after a positive steroid test.

She returned to the promotion after the ban and opted to switch divisions, eventually moving to the 115-pound division.

Since her shift to strawweight, Amanda Lemos (11-1-1) has been a force to reckon with, displaying the power and precision miles above the division.

Currently on a five-fight winning streak, with an 82% finish rate, including seven by knockout, two by submission, and two by decision she boasts one of the most impressive stats in the division.

Lemos was on an impressive run of two knockout finishes before being taken the distance against Angela Hill, a contest she won via split decision.

The decision in the heated match, which earned the night’s best fight, caused controversies across the MMA world.

Lemos, however, sets her focus on her biggest test to date when she squares up against former champion, Jessica Andrade.

Jessica Andrade(22-9) has lost three of her last five bouts, but would be looking to continue her winning run.

A loss to flyweight champion Valentina Shevchenko served as an eye-opener to the number one ranked fighter Andrade as she came out with a flurry of punches to secure a first-round finish against Cynthia Cavillo on the UFC 266 main card.

After doing quick work of Calvillo, Andrade summoned the big guns in the division, including Rose Namajunas and Zhang Weil, despite previously recording losses against both.

Amanda Lemos is the taller fighter in this matchup at 5”4 while Andrade is 5”1. Lemos will also have a significant 3-inch reach advantage over this fight.

Nobody would bet against a prime Andrade who has far more MMA experience than Lemos, with a total of 31 fights to Lemos’ 13. But, Lemos is highly skilled and climbed the UFC ranks by putting on spectacular performances

The bout is an excellent match-up between the two strawweight. Andrade lacks the height and reach advantage, which will not faze her as she closes the distance with power hooks, striking combinations, and looks to tie Lemos up to give her a taste of her strength.

This will be a tough fight for both parties, considering their similar fighting styles. Headlining UFC Fight Night is an electric battle between these fighters at 115 pounds. If you blink during this fight, chances are you will miss something amazing.