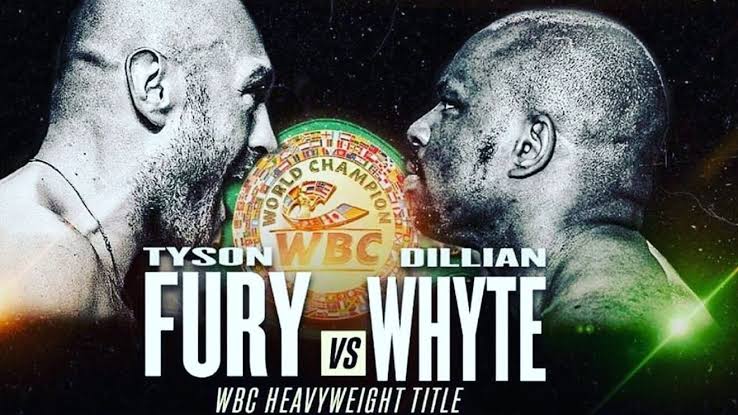 Dillian Whyte is the mandatory challenger for Tyson Fury and takes on the undefeated champion on Saturday, April 23, 2022, at Wembley Stadium, London.

With each fighter ranked as one of the finest heavyweight boxers of this era, it’s no surprise there is tension in the boxing world in the build-up to this fight.

An exciting storyline going into this fight is that Fury and Whyte were sparring partners at one time– but on Saturday, all pleasantries will be put aside for a maximum of 36 minutes.

The former training partners have become foes, and the rivalry between them as the fight edges closer has intensified. The current Interim heavyweight champion, Whyte, has the intention of dethroning the Tyson Fury in what would be his first-ever defeat.

Incumbent champion Tyson Fury (32-0-1) has amassed enough wealth in the promotion and previously hinted at retirement.

Still, in a recent press conference, he backtracked his decision. He focused on his fight against Dilian Whyte (28-2) to determine the permanent Heavyweight Champion, a 12-round fight at three minutes per round to close the show.

Of the 28 wins Whyte has recorded, 19 have come by knockouts. Fury, on the other hand, has recorded 22 knockout finishes in 31 wins, but it is the former who has been hailed for his technicality and is believed to outbox the champion.

The fight will be on ESPN+ – it’s $69.99 for ESPN+ subscribers (a subscription costs $6.99 / month). For those looking for another way to watch, see our list of the best sports streaming sites.

The Brixton man earned his long-awaited title shot after knocking out Alexander Povetkin in the fourth round of their rematch to set up a showdown with Fury.

He flew to Portugal for advanced preparation in a bid not to miss his one-time opportunity at becoming a champion and continued to train in silence.

Fury’s camp are unimpressed by Whyte’s silence and unwillingness to promote the bout. Whyte, who is usually a social media nuisance, took to the media to explain his inactivity. He cited his previous ordeal with Fury’s camp, which resulted in multiple failed fights, as a reason for his disappearance.

“You make an agreement to get the ball rolling, but there are still underlying issues that need securing and sorting out, and then when people are trying to play games and messing around then you’ve got to control what you can control,”

“What I could control is my actions, not what Fury does. So that’s what I did.”- Whyte said.

Fury has been the opposite of his opponent in the fight’s buildup, constantly antagonizing Whyte. He accused the ‘Bodysnatcher’ of avoiding a pre-fight face-off and throwing in the white flag. Whyte again broke his silence as he chimed in on the champion’s prefight gimmicks.

‘Me and him are gonna have a fight regardless, so I don’t care about mind games. I’m a fighter, I’m a warrior. If he wants it – any time, anywhere – I’m down. I don’t give a f*** about this, that and the other. He can’t get in my head. Even if he gets in my head, he’s only gonna find a lot of disturbance in there.”- Whyte said.

Fury’s New Routine Can Be The Difference

The big fighter has an excellent jab and a powerful left hook which gives him a chance against other heavyweights. Fury engaged in an open training session and explained his new training routine, which has left many fans wowed.

“We all know I’m ambidextrous and can punch with both hands, I’ve had knockout wins with my right and my left so I’m just sharpening it all up and ready to rock and roll. That’s what we’re aiming for, it’s what Sugar delivers, it’s that knockout style – I was watching the greats yesterday, getting inspiration from George Foreman, Larry Holmes and Joe Frazie”- Fury said.

Meanwhile, Whyte is a counter puncher, with more tools in his arsenal than most heavyweights. He varies the speed and power on his jab excellently, and despite the height difference, he has good reach.

‘The Gypsy King’ has yet to lose in his professional boxing career. He defeated Wilder in their rematch by a technical knockout in the seventh round after a dominant performance. He also knocked out Wilder again in their Trilogy in the 11th round.

Dillian Whyte, 34, now enters the biggest fight of his career and he’s not letting his past sparring experience with Fury distract him from his ultimate goal.

Whether or not he “beats the champion” in the main event is yet to be seen. The bout takes place on Saturday, April 23, 2022, at Wembley Stadium, London.