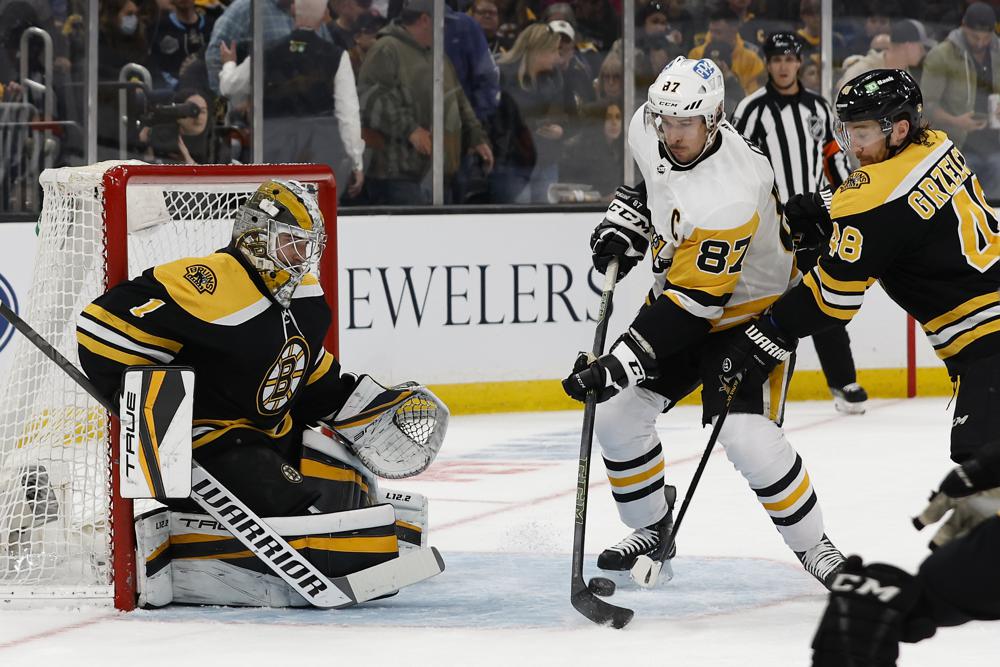 The Bruins secured their ticket to the playoffs, clinching a berth with a dominant win over the Pittsburgh Penguins at the TD Garden.

Despite their offensive struggles and lackluster finishing in front of goal, The Bruins bounced back from their torrid form, which saw them lose their last three games, conceding 11 goals.

The win also marked the sixth straight qualification for the postseason, effectively ending their rival’s playoffs hopes with two weeks left in the season while cementing their position.

The Bruins started with heavy pressure early and fast-moving legs, getting some zone time from the first few lines. Their intensity was rewarded less than 60 seconds into the game when Trent Frederic, laid off from the last game, scored with a backhand rebound.

The American became a full-time NHL player last season on the fourth line, a decision subject to controversy in the NHL after being touted as a potential 40-goal-per-season scorer. He, however, expressed his delight at the playoff qualification, citing his time off as his morale booster.

“I just wanted to play hard, try to help the team, play disciplined.” Frederic said at a postgame press conference, as seen in a video the Bruins provided. “Obviously try to get a win. Anytime we’re winning, that’s good.”

“It looks a lot easier up there, (I watch) just how much more time you have, picking up on little things. I try to watch the wingers, and see what other teams are doing. I think it helps anytime you get up there. (Time off) helped me in college, when I hurt my hand and had to watch for month or so. I thought it helped my game. We have a lot of good players, so it’s hard to be in this lineup every night.”

What Next For The Bruins

The head coach, in his post-match interview, heaped praise on his players and the team’s achievement after enduring an injury-hit and a slow start to the season. He also discussed a shift in their focus as they look to adjust their vulnerabilities before the playoffs.

“Well we talked about the reward,” Cassidy said at a postgame press conference, as seen on NESN’s “Bruins Overtime Live.” “We have a standard here right so we’re not going to you know go out and celebrate that we made the playoffs, but it’s still an accomplishment you should be proud of.”

“It’s not easy to do it year-in year-out in this league. ? The New York Islanders, for example, (went to the) two (consecutive) Eastern Conference Finals … right down to the wire. They’re almost needing a miracle now to get in. So it’s not automatic, you know, fix out the journey year. For us. It certainly didn’t look automatic in November.”

“Give the guys credit, they played through some adversity then,” he said, as seen on “Bruins Overtime Live.” “We ended up finding our game and maybe took us a few more games than we had hoped here recently. … We’re in now and now we can start building our game for the playoffs, which I think we’ve been doing it for the last few months to be honest. We just got to get our habits back and hopefully stay healthy.”

They have seven games left until the postseason, so the focus is shifting to fine-tuning their game and finishing as high as possible to potentially secure home ice in the first round.