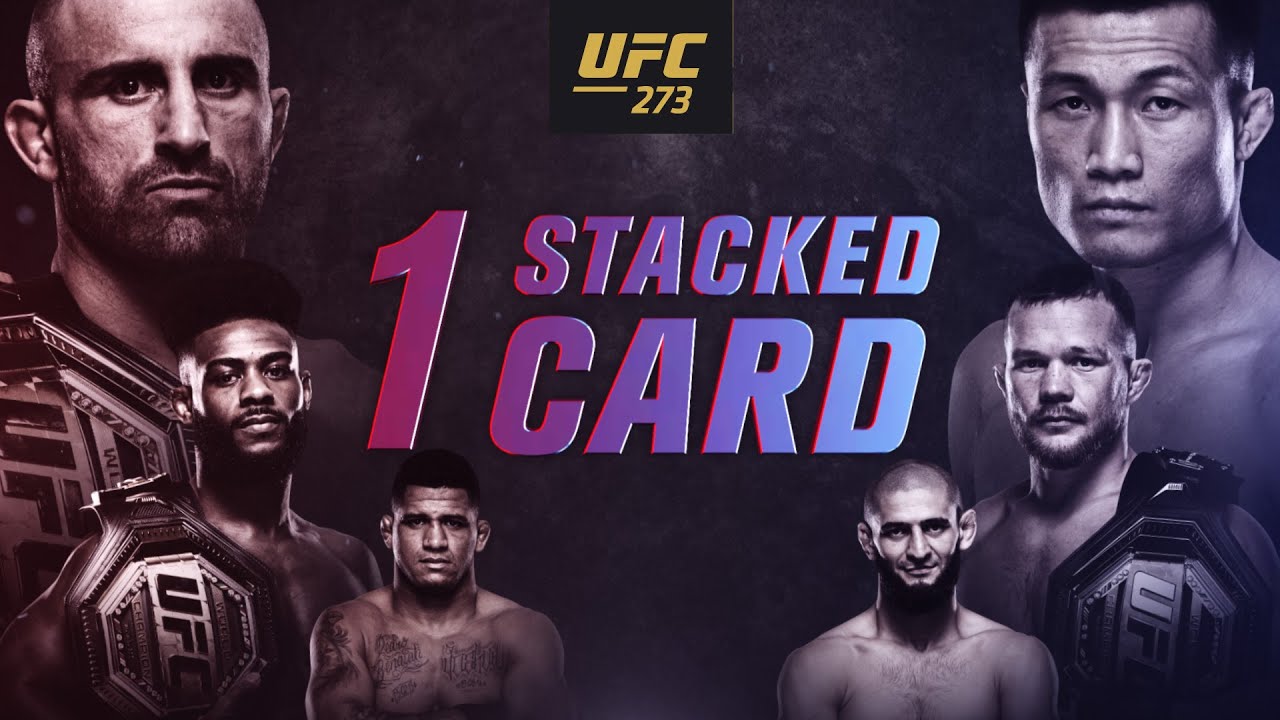 UFC 273 takes place on 09 April 2022 at the VyStar Veterans Memorial Arena in Jacksonville, Florida, United States. The main card starts at 10pm EDT (7pm PDT). You will be able to watch UFC 273 via ESPN+ or through the UFC streams of your choice. Here’s our UFC 273 preview to help you keep track of the storylines.

Reigning champion Alexander Volkanovski is ready to defend his title once again against Chan Sung Jung after Max Halloway withdrew due to injury.

Volkanovski (23-1) is currently on an impressive run of form, winning his last 10 UFC matches. He recently defended his title courtesy of a unanimous victory over  Brian Ortega.

“The Korean Zombie” is determined to dethrone the champion when both fighters meet on the 9th of April.

The UFC 273 co-main event has another blockbuster match between Aljamain Sterling and Petr Yan.

The interim titleholder, Petr Yan (16-2), lost his UFC title by disqualification to Aljamain Sterling in a fight that ended on account of an illegal knee.

He bounced back with a dominant unanimous decision win over Cory Sandhagen to capture the interim title. Sterling, on the other hand, goes back into the cage after a year of inactivity in a bid to hurt the Russian when both men face off.

This bout would resolve the long-term rivalry between both fighters, which escalated as Sterling won his first UFC title in the most embarrassing scenario.

The excitement surrounding UFC 273 goes beyond these two title bouts.

Despite the cancellation of the much-anticipated fight between Kelvin Gastelum and Dricus De Plessis, the main card still boasts interesting contests that have wide-ranging implications for the fighters in their respective divisions.

Khamzat Chimaev is a fast-rising prospect and will look to continue his dominant run in the UFC when he faces his biggest test yet, Gilbert Burns. The Swedish fighter has won his last ten fights, each victory coming either by submission or knockout.

Burns recovered from his recent loss by defeating Stephen Thompson. Despite the Brazilian’s experience and Jiu-Jitsu, ‘Borz’ is a massive favourite heading into this fight. A win for either side fighter will bring them closer to getting a title shot against Kamaru Usman.

There is also a strawweight clash between Mackenzie Dern and Tecia Torres. The in-form Torres has claimed three wins in her last three bouts and has her sights on the seventh-ranked strawweight fighter, Dern.

Mackenzie, in a recent interview, acknowledged the authority and fighting prowess of her opponent. She would be looking to bounce back from her most recent loss to Marina Rodriguez in this heated contest.

The co-main card also consists of a heavyweight showdown between Aleksei Oleinik and Jared Vanderaa. Vanderaa stepped in to fight the Ukrainian after Ilir Latifi pulled out due to illness.

Oleinik has lost his last three fights comprising notable fighters like Derrick Lewis and Chris Daukaus. It would be interesting to see how Vanderaa, who has lost twice in a row, fares against the 44-year old.

The card is stacked from top to bottom, with some very exciting matchups going on in the preliminaries as well.

Rozenstruik would be looking to bounce back from his unanimous decision loss to fellow heavyweight bruiser Curtis Blaydes when he faces Marcin Tybura.

Anthony Hernandez will also square up against Josh Fremd after his proposed fight with Dricus Du Plessis got cancelled.

You can watch UFC 273 via ESPN+ or through the UFC streams of your choice.